Archive
Liz Smith: In a World of Faux Stars, Barbra Streisand Remains the Real Deal and Pitch-Perfect After All These Years

“It’s hard to have stage fright when, like, there’s no stage!”

Permalink
comments
“Barbra, Back Home In The Village” — By Richard Hake

NEW YORK, NY September 30, 2009 —Barbra Streisand released her latest album this week. It’s called “Barbra: Love Is The Answer” and includes 13 jazz standards. But when you already have 62 albums in your repertoire, what could you possibly … Read more »

Haven’t had a chance to watch videos from Saturday night’s performance at The Village Vanguard? Now’s your chance!

You can now watch these great performances from ‘The Girl Singer’, as she was introduced on Saturday evening. Click: http://www.barbrastreisand.com/us/village-vanguard-2009

Permalink
comments
“Love Is The Answer” Out Today! Send Us Your Reviews

Fans will be pleased to know that Barbra’s 63rd album, “Love Is The Answer”, was released today!

We’re giving fans the chance to write a review — and have it posted on BarbraStreisand.com

To add your review, you must click … Read more »

Permalink
comments
Lucky Streisand Fans Were A-Listers for a Night

Or so it first seemed on Saturday night at the Village Vanguard, the tiny West Village jazz club where she was singing for the first … Read more »

Weren’t at the Vanguard?? Here’s the next best thing. Three gorgeous videos from Saturday evening.

Barbra returned to her roots last night, as she performed in Greenwich Village to an exclusive crowd of competition winners, along with some of her family, and closest friends. Keep checking back for exclusive video footage and photographs from the … Read more » 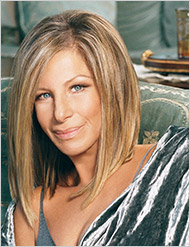 IT seemed clear from her reaction, at once intrigued and a little amused, that Barbra Streisand had never been asked by an interviewer about her diaphragm.

But as an opera devotee and a … Read more »

Barbra recorded an interview this week with Oprah Winfrey in Chicago, and performed two songs, ‘Make Someone Happy’ and ‘Evergreen’. Unfortunately the latter was cut due to time constraints, however we’re pleased to announce that you can watch Barbra perform … Read more »