Barbra Streisand to Women in Hollywood: “We Have to Join Forces” 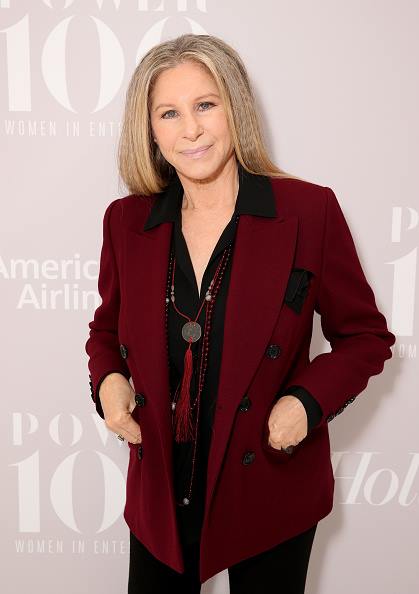 By Rebecca Ford – The Hollywood Reporter

“The more we support each other, the stronger we become,” said the performer who received the Sherry Lansing Leadership Award at THR’s Women in Entertainment event on Dec. 9.

At The Hollywood Reporter’s 2015 Women in Entertainment breakfast Wednesday morning, Barbra Streisand encouraged women to work together — rather than against each other.

“We have to join forces. Women are nurturers, just by our physiology,” she told the audience while receiving the Sherry Lansing Leadership Award at the event at Milk Studios in Los Angeles. “We come from the heart, and our instinct for love and compassion is something that this chaotic world needs more than ever.”

The 10-time Grammy winner said that women need to band together to support Hillary Clinton and “elect the first American woman president, someone who will represent our values and our interests.”

“But that means all of us have to get the rest of us out to vote,” she added.

Robert Redford, who co-starred with her in the 1973 movie The Way We Were, presented Streisand with the honor, which recognizes women who serve as pioneers in the world of entertainment. The award has previously been given to Shonda Rhimes, Oprah Winfrey, Meryl Streep, Diane Keaton and Jodie Foster.

“I’d been warned about her that she could be a pain in the ass, and that she was a control freak,” said Redford of his former co-star. “But what I found out what that she was a sheer pleasure to work with.”

“What I found is that she didn’t revolutionize — but she instigated a new kind of beauty,” he added before welcoming Streisand, 73, onstage.

Streisand who also won two Oscars and, in addition to her music and film career, Streisand, is a strong philanthropist and activist, launching The Streisand Foundation in 1986 to spotlight women’s equality and human rights and has also made charitable contributions to help fight women’s heart disease.

During the event, which celebrates THR’s annual Women in Entertainment Power List, she spoke about several issues including gender discrimination and women’s heart disease.

“Gender discrimination drives me crazy,” she said. “Women are still treated as second-class citizens when it comes to equal pay in the workplace and equal representation in Congress.”

Streisand, who contributes to help fight women’s heart disease, has pushed for gender equality in research. “Gender inequality even extends to mice in the labs. They’re all male!” she said. “So even female mice are discriminated against! When I asked why, the answer I got was that female mice have hormones so they’re more complex. Well, so are women!”

She added: “I’m also angry that the right for a woman to control her own body is still an issue.”

Streisand reminisced about how she was given bad grades for conduct when was a child because she was so outspoken. She says: “A lot of people don’t like when girls — or women — speak up.”

“Nothing much has changed,” she added, reflecting on how even the way men and women in power are described is different. “A man is commanding; a woman is demanding. He’s assertive; she’s aggressive. He shows leadership; she’s controlling. A man is committed; she’s obsessed.”

She ended her speech by calling out how female journalists interview GOP candidate Hillary Clinton. “[I] noticed how snarky they can be. Their tone from the very beginning is antagonistic, judgmental, as if they want to prove how tough and hard-hitting they can be against someone of their own sex,” she explained. “Sometimes it feels as if we’re all still back in high school, where the boys learn strategy and teamwork, playing football, and the girls are competing for the quarterback.

“It’s interesting, and I remember this from my childhood: it’s not a great idea to have three little girls play together because usually two of them will gang up on the other one,” she continued. “Maybe that’s part of the female collective unconscious. Whatever it is, we have to fight that instinct.”

Streisand also encouraged the women in the room, including the young mentees who were awarded college scholarships at the event, to speak out against gender inequality.