Lucky Streisand Fans Were A-Listers for a Night

Or so it first seemed on Saturday night at the Village Vanguard, the tiny West Village jazz club where she was singing for the first time in 48 years. In attendance, as you might expect for such a special event, were Ms. Streisand’s celebrity BFF’s like Donna Karan and Nicole Kidman. And, ensconced at a side table, sat Bill, Hillary and Chelsea Clinton.

But outnumbering the boldface names were two busloads of ticket-lottery winners, ordinary fans from around the world. Some said they had never been able to afford a Streisand ticket before, but on this night they rubbed elbows with Oscar winners and a former president, and their entrances to the 74-year-old club rivaled the celebrities’ in glamour.

When Reneé Cole, a slender, blond 25-year-old from Brooklyn who was wearing a black dress she had made herself, stepped off the bus in front of the Vanguard’s red awning, camera flashes burst from the sidewalk crowd, and at the request of a videographer behind the police barricade, she took a twirl in her new dress on her way through the door. 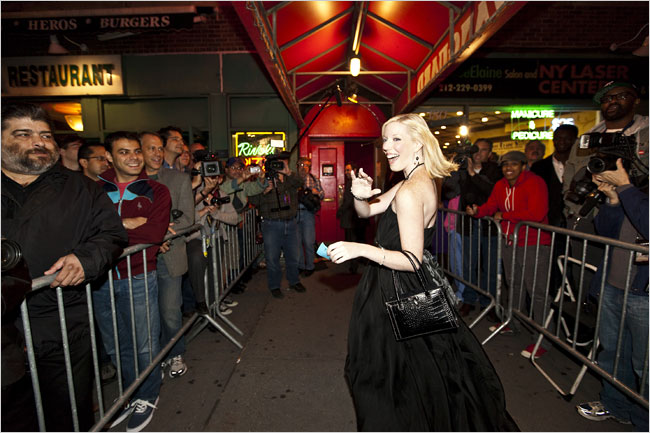 “I was plotzing,” said Ms. Cole, an aspiring actress who added that Ms. Streisand’s story had inspired her to move to New York from coastal Maine to pursue her dream.
Concerts by Ms. Streisand are rare, but the scale of Saturday’s show was exceptional enough to briefly upend the natural social order of celebrity events. To promote her new album, “Love Is the Answer,” which will be released on Tuesday by Columbia, Ms. Streisand was booked for one night at the Vanguard — legal capacity 123, absurdly small for an artist who has sold 71 million albums in the United States alone. The scarcity was made more acute by the fact that 74 seats had been given away through online fan contests and that video cameras would be eating up some of the little space remaining.

Videos of five songs from the show will be streamed on AOL and on Ms. Streisand’s Web site, barbrastreisand.com; Ken Sunshine, her longtime publicist, said, “There may eventually be a DVD.”

The contest winners were gathered at the Sony building in Midtown Manhattan on Saturday afternoon and screened with metal detectors. To prevent audio or video leaks online, they were told to leave all electronic devices — including cellphones — behind or forfeit their tickets. Once on board the buses, they traded “Funny Girl” stories and shrugged at all the security fuss, which also included a laminated pass on a lanyard, a paper wristband and stamp in red ink.

“I thought it was like seeing the pope,” said Shari Hansen, a 58-year-old hospital transplant coordinator in Denver who said she left her husband behind on their anniversary to attend the show. “They could have given me any kind of restriction, anything at all, and I still would have been here.”

The Vanguard ticket was so impossibly hot that a satellite party for spillover V.I.P.’s was arranged uptown at the Waldorf-Astoria, where a live video feed was shown to a few dozen people, including former Mayor David N. Dinkins, Streisand family members and record-label employees. In the elegant Louis XVI Suite, where chandeliers reflected the flickering table candles, a voice from one table erupted during Ms. Streisand’s first song, “Here’s to Life”: “Oooh, is that Sarah Jessica Parker?” (Indeed it was, front and center at the show.)

Onstage, Ms. Streisand alternated between lighthearted banter, some of it about the club’s close quarters — “It’s hard to have stage fright when there’s hardly any stage” — and gentle performances of 12 songs, including standards from “Love Is the Answer” and Streisand immortals like “Evergreen” and “The Way We Were.” The last time Ms. Streisand sang at the Vanguard she was auditioning but didn’t get the gig.

The cameras panned across the room and lingered on famous faces; sometimes the less-famous ones seemed to get in the way. Throughout the show Ms. Streisand called out lovingly to her close friends in attendance, like Ms. Parker, Ms. Karan and the songwriters Marilyn and Alan Bergman, writers of two of the tracks on her new album. When Ms. Streisand got to Mrs. Clinton, who was surrounded by contest winners, the cameras had difficulty at first finding a good angle.

For her longtime fans, Ms. Streisand had only a few words: “I want you to know how much I appreciate your support over all these years.” Inside and outside the club, those fans were rapturous.

Larry Sayoc, 40, who works in real estate, did not get into the show but waited next door at Rivoli Pizza, where he pressed his right ear against the wall and stood transfixed for 20 minutes. “I could hear a bit of ‘The Way We Were,’ ” he said, beaming.

Michel Filion, 49, a photographer from Montreal, was luckier. He had won the ticket lottery, and said he was wearing the same cherry-red blazer that he wore when he saw Ms. Streisand in Auburn Hills, Mich., in 1994. He managed to swipe a paper coffee cup that his idol had left behind on stage.

“I don’t know, I guess I’ll bronze it,” Mr. Filion said, adding that he already had a scrap of carpet in his house from another theater where Ms. Streisand had once played.
By the time the show ended, at around 9:30 p.m., the old order was restored somewhat: the contest winners were free to go about their evenings, with no buses to spirit them away from the mass of humanity to which they were now returning. Reached later in the evening, Mr. Keyser was still grasping for words to describe his ecstasy.

And the Waldorf-Astoria suite became a reception for all the V.I.P.’s — Sarah Jessica Parkers and Barry Dillers and James Brolins included, and contest winners excluded. Aided by two bars and a spread of desserts, the reception crowd mingled and gabbed coolly into the evening, until around 11, when whispers of “She’s in the room” began circulating through the suite.

Guided by Mr. Sunshine, Ms. Streisand began to make her way through the party, and guests of all levels of fame lined up excitedly along her expected path, waiting with smiles to pay their respects to the woman who seems able to make almost anyone act like a fan.

Right before Ms. Streisand arrived, Tamir Hendelman, her pianist, said, “It doesn’t matter if you’re Clinton or the guy who won the contest — she’s singing to you.”