Comment by Barbra Streisand upon the passing of revered former President of the State of Israel, Shimon Peres 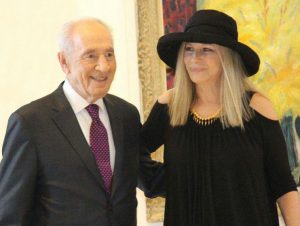 My heart is bleeding…my tears are falling…because President Shimon Peres is no longer in this world. He was a father figure not only to his beloved country of Israel, but also to me, because he was what I imagined my father would have been like.

Shimon’s mind was expansive and his heart was compassionate. He was a brilliant statesman, gifted with the ability to listen to others who did not share his views and still remained determined to find a path forward.

He was a voice of reason who also happened to have the sensibility of a poet…thoughtful and soft-spoken, but his words echoed loudly around the world.

I adored Shimon…and I’m so grateful that I was able to spend some time with him over the years, and sing for him at his 90th birthday celebration in Israel.

Thank God his spirit, his wisdom, and his ideals will live forever.

May he rest in peace.