“We ate a lot,” Streisand reports. “There’s something about recording that makes me want to eat. We would bring in Italian food, or go out to dinner. Diana taught me how to roll a piece of chicken with cheese inside and put it in the microwave.”

Making Love Is the Answer, the collection of traditional pop and jazz standards that arrives Tuesday, Streisand, 67, and Krall, 44, also played cards, traded stories about growing up and talked about “girly-girl stuff,” as Krall puts it. And they challenged each other.

“Diana records differently than I usually do,” says Streisand, whose last studio album was 2005’s Guilty Pleasures. “I mostly sing live with an orchestra, where she’ll sing with a quartet, then add the orchestra later.” Working at Hollywood’s legendary Capitol Studios with co-producer Tommy LiPuma, Krall set Streisand’s vocals against both lush orchestral settings and intimate jazz-quartet arrangements. The latter are available on a bonus disc in the deluxe version of Love.

The tracks were arranged by Johnny Mandel, who had worked previously with Streisand and Krall. Mandel’s music also is represented in the collection, along with tunes by Jerome Kern, Leonard Bernstein and Jacques Brel.

“Most of these are songs I’ve wanted to sing for a long time,” says Streisand. In a few cases, as with Smoke Gets in Your Eyes and Spring Can Really Hang You Up the Most, she had recorded the songs previously but hadn’t been satisfied with the results.

Krall suggested material, making mix tapes for the diva. “I did research from the time I was pregnant” with her twin sons (who’ll be 3 in December) by husband Elvis Costello. In a sense, she started long before that: “I’ve always admired (Streisand) as a singer, and a comic actress. The first movie I ever watched was What’s Up, Doc?”

When sessions started, “I was just like, ‘Oh, my gosh, do I deserve to be here?’ ” Krall says. Streisand “is a perfectionist in a way that I really respect. She’s intensely intense.”

When the star sang something Krall really liked, “she would point to the hairs on her arm standing up,” Streisand says. “It was cute, my audience of one.”

On Saturday night, Streisand promoted Love in another intimate setting, delivering a joyfully virtuosic performance at New York’s Village Vanguard — her first nightclub gig since 1962. Attendees included the Clintons (Bill, Hillary and Chelsea), Nicole Kidman, Sarah Jessica Parker and Donna Karan. Highlights from the show are streaming this week at AOL and barbrastreisand.com.

Though a tour isn’t planned, “it wouldn’t be out of the question — not if I could go to places I haven’t been, or where I haven’t performed this type of music,” Streisand says. Regardless, she looks back on the process of making Love fondly: “Diana is a good friend, and it’s lovely to work with talented people.”

Krall concurs. “I miss her. I would love to sit down with her for a meal again.” 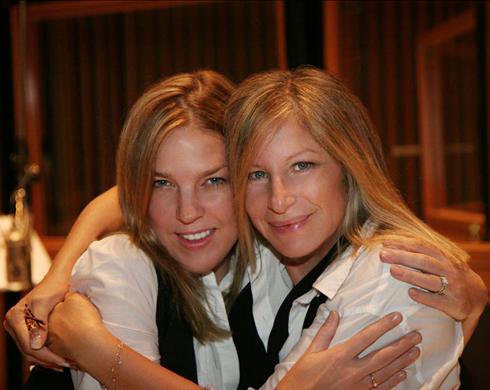