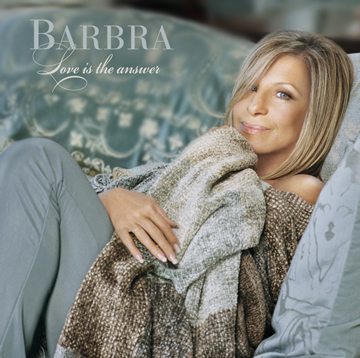 The first full-length collection of new studio recordings from eight-time Grammy award winner Barbra Streisand since 2005’s Guilty Pleasures. Love Is The Answer showcases the artist as a singer of emotional clarity, depth and maturity, offering the listener a selection of heartfelt late-night meditations on love’s powers, heartbreaks and solaces. It provides an opportunity for Streisand to work for the first time with the Grammy-winning Canadian jazz artist Diana Krall and her quartet (piano, guitar, bass, drums) who bring a refined and sensual poignancy to the album’s sophisticated and subtle accompaniments.

Rounding out the album’s smoky after-hours ambience with his sublime orchestrations is the legendary songwriter (“The Shadow of Your Smile”) and Grammy-winning arranger Johnny Mandel (who worked with Streisand on her 1993 Back to Broadway album and arranged/co-produced Krall’s 1998 Grammy-winning When I Look In Your Eyes).

The deluxe version of the album is a two-disc package that features the Mandel arranged orchestra versions on disc one and quartet counterparts on disc two featuring Barbra accompanied only by quartet (piano, bass, guitar & drums).

END_OF_DOCUMENT_TOKEN_TO_BE_REPLACED
Love Is The Answer: Tracks